The tenth anniversary of Pope Benedict’s Mass at Cofton Park 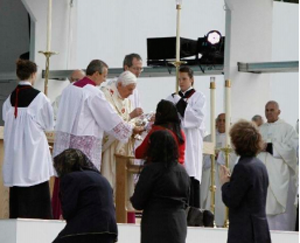 The tenth anniversary of Pope Benedict’s Mass at Cofton Park Ten years ago, we celebrated the huge event in Birmingham, just up the road at Cofton Park, where thousands upon thousands of people gathered from all over the world to attend Mass celebrated by Pope Benedict. I rehearsed for months with many choirs who had united to form one large choir. We arrived at 5am to get ready to sing. On the same day, one of our present teachers, a former pupil at St Thomas
Aquinas had the honour of being chosen to be an altar server. She has written a brief summary of her memories of that special day.

“It is hard to believe that this weekend just gone marked ten years since I had the honour of representing St. Thomas Aquinas as an altar server Committed Learners. Exceptional People.
at the Papal Mass in Cofton Park. I remember so many details from that experience, from meeting Pope Benedict XVI just before the Mass began, to the sun shining for us (even though rain had been forecast!). It was a very early start, arriving at Cofton Park at 6.30am to make sure everything was in place and that we all knew our responsibilities during the Mass. It was wonderful to look out from the sanctuary and see the thousands of people who had gathered to celebrate the beatification of one of our school house patrons, St. John Henry Newman. I had the very important job of holding an acolyte while Pope Benedict was giving out Holy Communion; I remember thinking that I needed to make sure I kept really still, as the BBC were streaming the Mass on live television! As we all sang the final hymn, ‘For All the Saints’, there was a huge sense of joy and relief that everything had gone well. The entire occasion was a wonderful experience I will cherish forever, and it is especially poignant for me on the ten-year anniversary, as this year also marks my return to St. Thomas Aquinas as a Teacher of Religious Education!”